The emergence and increasing dominance of mobile money in Uganda has resulted in the development of digital financial services. Though still at infancy, digital financial services present immense opportunities for financial inclusion. FinTech activities go beyond mobile money aggregation services to include broader technology solutions that can deliver affordable and high quality financial products and services. Whereas FinTech has revolutionised the financial sector in developed markets, it is only beginning to take root in emerging markets. In Africa, it is also beginning to gain traction, starting with South Africa, Nigeria, Egypt, Kenya and now Uganda.

The Global investment in FinTech currently stands at a staggering US$49.7 billion. From 2010 to 2015, the largest amount of investments had been received by the USA, UK, Europe, China, and India. Investment has more than tripled over the last few years, jumping from $4 billion in 2013 to $12 billion in 2014.

Most Ugandans are currently financially excluded because of, among other factors, limited spread of bank branches across the country. According to the International Monetary Fund (IMF) Financial Access Survey, the number of commercial bank branches stood at 578 at the end of 2015. However, 1 out 2 of these branches is in the 3 largest cities in Uganda.

Nevertheless, the ever-advancing technology of FinTechs makes it possible for them to deliver financial services to previously financially excluded areas. This is so especially in developing countries like Uganda where lack of adequate physical infrastructure makes it difficult for financial institutions to set up physical branches (brick and mortar). However, through channels like the mobile phone, FinTechs have been able to reach previously unreached populations in developing countries because such channels require minimal physical infrastructure.

Ms. Jacqueline. M. Musiitwa – Financial Sector Deepening Executive Director said: “Digital money presents us with immense opportunities on how to totally transform the financial markets landscape. FiniTech aims to broaden the agenda of financial inclusion and empower Ugandans to enjoy a wide range of financial services from banking, insurance, pensions to investments through their mobile handset”.

She added that the nimbleness, agility and innovativeness of FinTechs places them in good stead to drive down the cost of digital financial services and thus increase the financial inclusion frontier. This they can do, not as competitors, but rather as partners to the traditional financial services providers and telecom companies.

There are a lot of synergies that can be built and exploited between FinTechs and the traditional financial institutions and telecom companies.

The interoperability of mobile payment platforms across countries is one of them that must be pursued and benefits from it harnessed. This will be critical in facilitating remittances, which are one of the biggest sources of foreign investment in Uganda. Uganda currently receives close to US$ 1 billion in remittances. The nature of channels of remittances have made it quite expensive to receive money in Uganda. Interoperability presents us with the opportunity for reducing the cost of transferring money into and across Uganda.

The FinTech Association will provide a platform to build synergies, coordinate and represent the FinTech players in Uganda through facilitating them to form a common agenda. As enhancing inclusiveness and reducing poverty is increasingly becoming a common development agenda, it is important to put in place an appropriate legal and regulatory framework to keep standards high, avoid large-scale frauds that can shake both investor and consumer confidence, and provide guiding rules for making business model and clearer expansion decisions. Achieving this objective will require a collective effort of the regulators, policy makers and the industry actors. FSDU is a reliable partner in facilitating partners to realise this objective, through enabling various actors involved access technical assistance and capacity building.

Speaking at the launch, the Association Chair Mr. Muyiwa Asagba said “The Association will seek to represent the interests of members, work with government to formulate regulations that are supportive to enhance financial inclusiveness through technology”.

The Association will have a board continuum of experienced professionals and investors in the FinTech space to discuss the potential opportunities and challenges for FinTech in Uganda and coin the way forward.

FinTechs have the potential of increasing access to affordable financial services for the previously financially excluded Ugandans by leveraging Information Communication Technology (ICT). Beyond the Mobile Telecommunications Companies that provide the infrastructure for mobile money, there are a host of actors who provide support services to ensure that the end customer gets a good service. These include among other players aggregators, software developers, applications developers etc. These other players up to now have largely been in the background out of the view of the public and yet they play a vital role in ensuring that the mobile money ecosystem functions efficiently. 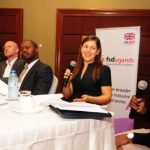 We want to know a little about You

The Overall Impact of COVID on The Economy; An Agile Scenario Analysis

The Impact of COVID on Agriculture in Uganda

Cooperatives as Engines of Transformation