Notes from the Frontier: Could Refugee Populations Be Ripe For Financial Inclusion?

Notes from the Frontier: Could Refugee Populations Be Ripe For Financial Inclusion?

As we approached the Kiryandongo Refugee Settlement area, we were met with a calm sense of normalcy. People went about their business as usual, men and women tilling farms, children running around playing in school grounds and traders displaying their products at small designated shopping centres within the settlement.

On 23rd March 2018, PostBank Uganda was launching the prepaid card at Kiryandongo refugee settlement area for World Food Programme beneficiaries. FSD Uganda among other key players had been invited to witness this significant milestone in cash transfers in Uganda. World Food Programme having over the years partnered with PostBank to remit funds to refugees totalling up to USD 2.1 million every month were particularly enthusiastic about this development.

With a recent World Vision report indicating that only 2% of refugees in some settlements in Uganda are financially included, this launch could not have come at a better time. The prepaid card is designed to serve varied needs of the refugees within the settlement. The technology used provides innovative tools, including new identification and verification measures such as bio-metrics to create user profiles that support more effective identity verification, fraud prevention and support risk-based monitoring of transactions. Get this; refugees could also use the same prepaid card to access funds remitted by multiple humanitarian agencies, addressing a key reporting and coordination headache currently being faced in the country. From where donors and agencies sit, this significantly eases their work and provides a much-needed trustworthy platform to scale up their payments and support to these vulnerable communities.

Financial inclusion shouldn’t just be for citizens; it should be for all. As at September 2017, an unprecedented 1.3 million refugees and asylum seekers had been forced away from their homes and into Uganda due to war, persecution, strife, poverty, environmental crises and other reasons. Refugees are no different from national populations in that they increasingly use technology. In Uganda, for example, more urban adult refugees (96%) than the national average (45%) use mobile phones, while in the rural refugee settlements, roughly 70% use a mobile phone for keeping in touch, for price checking (among farmers), receiving humanitarian aid, remitting funds, and making payments.

Emerging evidence suggests that a refugee community that is nationally and transnationally integrated contributes in positive ways to the national economy, is economically diverse, and is far from dependent on international aid. Refugees could benefit from financial inclusion, just like nationals. So why do refugees remain largely unbanked?

Host government policies play a significant role in refugees’ access to financial and other services. Uganda has taken important steps to enact and adopt legislation that emphasizes greater rights for displaced people and more integration of displaced populations into national development plans.

Legality barriers create a strong disincentive both for refugees to approach formal financial institutions and for FSPs to serve them. In addition to many other barriers to financial inclusion that refugees share with poor citizens, they are often confronted with the additional challenges of uncertain legal status, limited rights to work or to move, and inadequate identification papers and documentation of residence.

Many FSPs are unfamiliar with Uganda’s refugee populations, and are uninformed as a consequence. Refugees are typically not very visible in their host country market place, and they are rarely familiar with local FSPs. Some refugees may have a low level of financial education, others may prefer alternative (informal) financial service providers that they know and trust. Refugee populations will rarely initiate contact with host country FSPs, often because they assume that they will not be eligible customers or simply because they do not speak the host country language confidently and do not believe FSPs have interpreters. 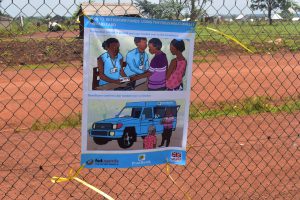 Almost all FSPs offer client training, but often the capacity extends only to basic information about the FSP’s products. However, for new refugee clients, induction training may not be sufficient. Many refugees also need market orientation training to know their legal rights, local business registration, local markets and value chains, as well as general life/social skills training, including topics such as language, computers, health, and household budgeting. Like many national clients, refugees also benefit from financial literacy, business management skills training, and technical training in self-selected, marketable vocations.

FSD Uganda is learning from FSPs already keen to serve refugees that more comprehensive and continuous non-financial support services are not only a valuable add-on to standardized financial services, but also an essential aspect of successfully serving refugees. Indeed, by implementing a financial literacy program alongside the cash transfers, Post Bank provides an urgent and necessary service to these communities.

While refugees may face additional barriers to financial inclusion compared to their national peers, their potential as a viable market segment does not differ significantly from nationals in terms of their entrepreneurial potential, economic strategies, or demand for financial services. A new picture is emerging of a large segment of refugees as resourceful and presumably bankable economic agents, who already form part of the informal economy as consumers, traders, producers and employers and whose additional trans-national networks might augment their potential success as FSP clients.

FSPs could benefit from engaging in this new frontier of financial inclusion through client-centric market research to better understand refugee populations and identify among them the client segments they can best serve. Enabling access by refugees to existing products and services may result in greater financial self-sufficiency. In the process, FSPs could help refugees build additional social capital and put down stronger local roots to contribute more to the local host economy. These outcomes contribute to achieving an FSP’s social goals, such as increasing client inclusion, economic empowerment, integration, and social cohesion. FSPs should not underestimate the reputational benefits and enhanced staff morale that can result from such efforts to be part of the solution to a global problem.

The drivers outlined in the blog are summarized from the originally published “Guidelines for FSPs on servicing refugee populations” by the UNHCR and SPTF.

How the blockchain technology can secure your mobile phone transactions